Sako is a real asset - Pardew 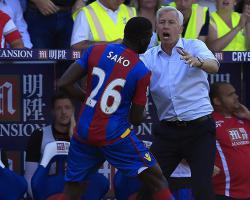 Sako was destined for a place on the bench until Yannick Bolasie was granted compassionate leave following the death of his father.

And the Mali international scored three minutes from time to give Palace victory with a goal on his debut after signing on a free transfer from Wolves.

"He will be a real asset for us," Pardew said.

"He's announced himself today in no uncertain manner.

"Once he got it on to his left foot I was actually quite confident that he would find the corner because in training he's been hitting that with real venom."

Sako's strike stifled any debate surrounding another controversial offside decision, when Dwight Gayle had a strike ruled out after it ricocheted in off James McArthur.

The amended law which the Premier League felt compelled to clarify following Liverpool's defeat of Bournemouth had nothing to do with this week's decision, but still assistant referee Peter Kirkup and referee Keith Stroud took their time to rule out the effort.

Not often I say that," said Pardew, who, when at Newcastle, was fined ÃÂ£20,000 and given a two-match touchline ban for pushing Kirkup in a game against Tottenham three years ago.

"He made a great call

I said to him 'why didn't you flag straight away?' he said 'I wasn't sure if it hit him'

Palace prevailed despite being without Bolasie, who has been linked with a ÃÂ£25million move to Tottenham and flew to Congo on Friday after receiving his sad news.

"I'm not putting him under any pressure to come back," Pardew said.

I couldn't care less if he takes three weeks (off)

It's not easy losing your father."

Bolasie was replaced by Glenn Murray in the line-up, with the striker substituted at half-time for Gayle and Wilfried Zaha taken off for Jordon Mutch.

Pardew said: "I thought they both did okay, Glenn and Wilf, but the system didn't suit them

I was pleased with Jordon and Dwight, I thought they both did really well."

Villa boss Tim Sherwood thought his substitute had turned the game in his side's favour when Pape Souare diverted Adama Traore's cross into his own net to cancel out Scott Dann's header.

Then Jordan Amavi gifted possession for Dann to lay on Sako's winner.

Sherwood said: "What you see is what you get with young players, you saw Traore light it up, he's got no fear.

"On the flip side you see a young boy and outstanding player in Amavi make the wrong decision at the wrong time to take someone on that late in game, and unfortunately we came away with nothing.

"We created chances and unfortunately we were unable to take them.

"Palace came out a better side in the second half

They scored, we managed to wrestle our way back in, (so) to lose with three minutes to go was devastating.

"They didn't have to work hard for both goals."