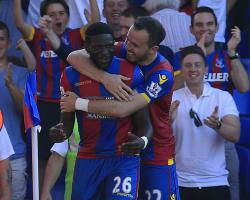 Sako, who joined from Wolves in the summer, struck three minutes from time, exploiting a defensive mix-up from Villa to give Palace a deserved win.

The visitors had already benefited from defensive indecision when Pape Souare diverted Adama Traore's cross into his own net to cancel out Scott Dann's header.

Palace had found the net before Dann's opener.

The amended law which the Premier League felt compelled to clarify following Liverpool's defeat of Bournemouth had nothing to do with this week's decision.

Whether James McArthur was offside when Dwight Gayle shot before the ball ricocheted in off the Scot was the talking point and assistant referee Peter Kirkup and referee Keith Stroud belatedly ruled he was and the effort was chalked off.

Alan Pardew has history with Kirkup, as when he was at Newcastle, the Palace boss was fined ÃÂ£20,000 and given a two-match touchline ban for pushing the official in a game against Tottenham three years ago.

Palace prevailed despite being without Yannick Bolasie, who has been linked with a ÃÂ£25million move to Tottenham.

Bolasie was replaced by Glenn Murray, but Palace made it aware it was on compassionate grounds following the death of his father.

Murray's performance only served to show Palace should accept the reported ÃÂ£5million Bournemouth are said to have offered and he was taken off at half-time.

Villa appeared the more menacing in the first half as Wilfried Zaha's game lacked an end product for Palace and he too was hooked at the interval.

Rudy Gestede and Jack Grealish were brought in as two of Villa's three changes and the pair troubled Palace in contrasting ways.

Gestede had the brawn, Grealish the flair, testing Palace goalkeeper Alex McCarthy with one effort from wide on the left towards the end of the first half.

McCarthy had earlier saved well to deny Gabriel Agbonlahor one-on-one after Grealish had threaded a ball through.

Joel Ward took steps to stop Grealish and was booked for a foul the playmaker, whose shin pads provided little protection.

Zaha next won the ball from Leandro Bacuna and played a one-two with Murray, but the return pass was behind him as he shaped to shoot.

Pardew brought on Gayle and Jordon Mutch, who almost had an immediate impact crossing for Bacary Sako, but Brad Guzan denied him.

Yohan Cabaye was next to fell Grealish before Gayle was denied his goal after much deliberation between the match officials 29 minutes from time.

Former Barcelona forward Traore breezed down the right, inside Puncheon and his cross deflected in off Souare, with McCarthy wrong-footed and helpless.

Next Guzan and his left-back, Jordan Amavi, contrived to present Palace with a chance and Dann won the ball before Sako finished emphatically to earn Palace victory.

"Get in! Just what we deserved today! First home win of the season" - Connor Wickham celebrates Palace getting off the mark at home

Jack Grealish: Villa will become increasingly reliant on the playmaker, who is tipped for England honours

But the 19-year-old needs support if Villa are to harness his vision, which he showed in flashes at Selhurst Park.

MOMENT OF THE MATCH

Bacary Sako: Won the game for Palace to prove his worth after his summer move from Wolves.

VIEW FROM THE BENCH

Alan Pardew's frustration with Glenn Murray and Wilfried Zaha, who were substituted at half-time, was nothing compared to his discontent with the offside which saw Dwight Gayle's goal ruled out

Tim Sherwood sent on former Barcelona youngster Adama Traore and he had the desired impact, but the Villa boss will want more from his side.

MOAN OF THE MATCH

Another offside decision will be the debate

The Premier League felt compelled to comment after Christian Benteke's goal for Liverpool against Bournemouth, which should not have stood

And now Palace feel wronged following an old-fashioned call of whether a player was level or not.