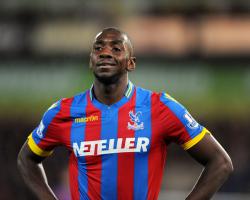 The enigmatic Congo winger dazzled in Palace's 3-1 defeat of Liverpool last Sunday which saw Warnock's men climb out of the Barclays Premier League relegation zone ahead of this week's trip to Swansea.

"He won't be going anywhere in January

How can they come in for him?

"I think he's made to measure for Palace

That type of club, the stage, the fans.

"It's can he keep the consistency now? We've got three games in a week.

"We need him to perform as he did against Liverpool in those games."

Palace had lost four of five league games prior to the defeat of Liverpool, which was their first win since a 2-0 triumph at home to Leicester on September 27.

Warnock's frustrations during the barren run boiled over following the defeat to Chelsea and he was fined ÃÂ£9,000 by the Football Association for criticising match officials.

Palace co-chairman Steve Parrish this week said he had asked Warnock to bite his tongue in future.

Warnock insisted his wife, who matches any financial penalties administered by the football authorities, is keeping him in check.

"It is news to me, that," said Warnock of Parrish's comments.

"If my chairman says that I'll agree with it

I did tell him I was making an effort now after the fine.

"I can't afford to keep giving my wife the same amount of money as the fine; it's a double whammy for me."

Swansea boss Garry Monk avoided FA censure for his criticism of referees around the same time as Warnock was punished after accusing Stoke's Victor Moses of "cheating" to claim a penalty.

Warnock added: "I remember before I was charged my wife saying: 'don't you ever give an interview like Garry Monk's just done - I will leave you'.

"I said: 'darling, he's not been charged'

He's obviously very clever and knows what to say

I'll have to ask him his advice."

Parrish also suggested Palace could compete for a European place in future.

Warnock's focus is merely survival in a competitive top flight.

"I don't worry too much about Europe or anything else," Warnock said.

"It's just getting enough points on board at first

I think 12 teams are just thinking of surviving

I don't think it's just the bottom three.

"More so this year, because most teams this year can beat the top teams

It's even more wide open."

Palace have not beaten Swansea in six meetings dating nearly six years and will be without Damien Delaney (calf) and Adrian Mariappa (knee).

Warnock added: "Delaney's not as bad as we thought

It's only a mild strain, but he won't be available on Saturday.

"Mariappa's going to miss a couple of weeks

He jarred his knee."