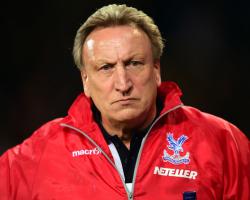 Having been denied a penalty in the opening seconds of the game and a possible spot-kick later in the first half, the Eagles fell behind when Steven Fletcher headed home before the interval.

A third Sunderland own goal in as many games, this time from substitute Wes Brown, brought the hosts level before Jordi Gomez and Fletcher struck either side of Palace skipper Mile Jedinak being dismissed for two bookable offences.

Already facing a Football Association hearing having questioned the motives of the referee in the recent defeat to Chelsea, Warnock also vented his disapproval at decisions which he believes went against his side at Hull and West Brom.

But the 65-year-old wanted to keep the focus on his team and not be drawn into criticising Phil Dowd's performance.

"I'm just disappointed for the lads," he said

On another night things go for us

It hurts like hell and it hurts the players as well

"We have got to regroup and play ourselves through it

At the moment we feel everything is against us

We were fantastic really

All we want is consistency and we want top-class refs to get top-class decisions right and it isn't happening for us.

"I have spoken to him (Dowd)

I don't want to tell you what he has said

I'm just deflated at the moment, as you can see

I just want to talk about my team."

When discussing his own players, Warnock called for them to show more of a mean streak having told them to up their game after a first half which saw them fail to test Costel Pantilimon in the Sunderland goal.

"We are a little naÃÆÃÂ¯ve at times and there are areas we need to improve," he said.

"We needed a few words at half-time

I said we have got to forget the officials and get on with our own game.

We have got to make our own luck.

He added on Sky Sports 1: "To top it all, we kick the ball out when their lad needed treatment, which was a nothing challenge, and they kick it out for a throw-in

Really respectful isn't it? I think we're too nice, too honest.''

One moment which did show the frustrations of Palace's players came when Jedinak was shown a second yellow card for a kick out at Gomez, with Warnock now losing his captain for Saturday's trip to Manchester United.

"Definitely," Warnock replied when asked if Jedinak's sending-off was a result of his angst.

"Jedinak was annoyed that they kicked the ball out of play

We have got to go to Old Trafford without him now for something as silly as that."

Gus Poyet saw his side pick up a win which moved them above Palace in the table and hopes the three points will lay to rest the memories of their 8-0 thrashing at Southampton a fortnight ago.

The Uruguayan was only concerned with leaving south London with a positive result, rather than drawing plaudits for fancy football.

"We needed a win somehow," the Black Cats boss said.

"It was about winning

We all like performances and we can talk about it, but today it was about winning.

"Today was a game where we knew we would suffer for periods and it would be ugly for a few moments and when you have the chance you have to take the ball down and play your game."

Poyet, who confirmed Patrick van Aanholt suffered a dislocated shoulder in the first half, also praised his side for not letting their heads drop when Brown turned Fraizer Campell's back-heel past Pantilimon.

The ugly side of football

But you need to do it for three points.

"Wes doesn't know how it happened, but it was a key moment

With the difficulties of the last few weeks, it would have been easy for the team to go weak and flat, and the players deserve credit."