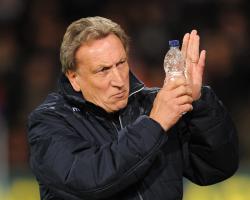 The Eagles boss, 65, had said referee Craig Pawson was ''influenced'' by Chelsea players in the decision to send off Damien Delaney for a second yellow card.

Warnock denied the charge and had requested a personal hearing, which was held on Wednesday.

"Warnock was charged following media comments he made after the game against Chelsea on 18 October 2014 which The FA alleged implied the match referee was motivated by bias; and/or brought the game into disrepute.

"The charge, which Warnock denied at a personal hearing, was found proven and he was also warned as to his future conduct."

Speaking ahead of Palace's match against Sunderland, Warnock accepted he would have to change the way he handled himself in the media.

''I don't think I can change the way things are

I have to change myself,'' said Warnock, who would go on to lament some decisions he felt went against his side in the subsequent defeat by the Black Cats on Monday night.

Whether that is detrimental to the press or not, I don't know, but I have to change - they are not going to change for me.''