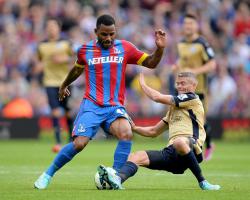 Puncheon set up both of Palace's goals in their 2-0 win over Leicester, with the Eagles now taking eight points since Warnock was installed as manager four games ago.

After an even first half, Palace struck twice in three minutes with a Puncheon corner knocked down from Fraizer Campbell to scramble home, with an inch-perfect free-kick headed home by skipper Mile Jedinak soon after.

For Leicester it was a poor performance following on from their impressive display in coming from behind to beat Manchester United 5-3 last week, as they threatened Julian Speroni only on rare occasions.

A feud between Warnock and Puncheon may have threatened the 28-year-old's career at Selhurst Park when Warnock was appointed as Tony Pulis' successor.

The Palace boss criticised Puncheon for missing a penalty in a game at Tottenham last season and the player responded with a series of Tweets which were derogatory to Warnock and, although they were eventually deleted, he was fined ÃÂ£15,000 by the Football Association.

But Warnock insists that is all water under the bridge as he sang the praises of Puncheon's recent performances.

"We had an evening meal together and talked about it," he said.

"I think he is enjoying it here, you have bust-ups and say things

He got told the wrong side of the tale at the time but the last couple of years he has been phenomenal and we are very pleased to have him.

"He probably isn't getting as much limelight as Yannick (Bolasie), but I have told him he is a marked man this year.

"When they mark Jason tight they leave Yannick space, so it is six of one and half a dozen of the other at the moment

With his contribution he is a manager's dream at the moment."

Leicester may have grabbed the most eye-catching win of last weekend but Palace, too, upset the odds by winning 3-2 at Everton.

However, Warnock was left encouraging his players to take more risks this time out as they picked up their first Barclays Premier League home win of the season.

"The lads came into the game after 20 minutes last week and we did the same today really," added Warnock,

We were a little deeper than we should have been but we changed after 20 minutes and were much more positive.

To get two goals so quickly was very welcoming."

Leicester's best chance came in a poor first half but Jamie Vardy, one of the match-winners over United, could only hit straight at Speroni.

Manager Nigel Pearson admitted it was switching off at the back which cost his side a result and that the cutting edge was lacking this time out.

"We didn't defend the set-plays as well as we have done in previous games," he said.

It was half an hour before they had a serious threat on our goal.

"But in the second half we didn't play with enough control, but I suppose what it illustrates is that you have to take your chances when they come along.

"There were individual errors but what you have got to do against sides who put a large emphasis on set-plays is not giving them away, and we gave away a few cheap ones

But our lads are only human and you aren't going to play perfectly all the time.