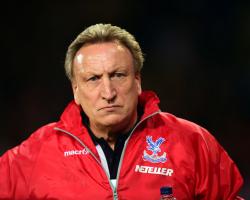 American billionaire Josh Harris has had discussions in recent weeks with Palace, who were rescued from administration four and a half years ago.

When asked if the takeover talks had affected the team during the international break, Warnock said in a press conference: "No, not at all

The lads never talk about it

"They get on with their own preparation

(The takeover) will only happen if it is for the good of the club."

The consortium which averted the prospect of administration guided Palace back into the Premier League.

After finishing 11th last season under Tony Pulis, the team is 17th heading into Sunday's home match against Liverpool.

Palace have lost four of their last five games, including a 1-0 defeat at Manchester United last time out.

Defensive woes have plagued the club, with Palace possessing the second leakiest defence in the competition with 20 goals given away in 11 games

Warnock says the players worked hard during the international break to improve.

"We have concentrated on the defence," the 65-year-old said.

"You have to get clean sheets to progress in this league and that is what we will try to do in the next few weeks."

Warnock is also hopeful that his team can be more clinical up front.

"We need to create a little bit more," he said.

"The teams perhaps have found us a little bit predictable

We have been unlucky but you cannot feel sorry for yourself

But we have a good group

Warnock also believes the club's famously vocal supporters are another important factor ahead of the Liverpool game at Selhurst Park.

"They were unbelievable home and away

It's the group of the fans we have

"They are a special bunch

Even when playing away from home, you can hear them

"It's fantastic for the lads

We expect a packed house."