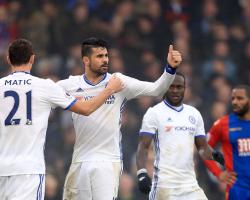 One is delighted at Christmas the other is lucky to not be in the relegation zone.

We are in a big relegation battle

The game against Chelsea was lost because of very poor defending

Wayne Hennessey was neither on his line or coming to collect the cross poor decision making from the Palace goalie.

The game lacked anything form of attack from Palace, we looked so poor in the final third it feels like we are going backwards

Only out of the champions league spot on goal difference

Pardew has destroyed the club by changing the way we play and it has not been for the better.

We travel to Watford on boxing day, if we donÃât win something seriously needs to change

We are doomed otherwise

Scoring goals for us isnÃât too much of an issue it is the defence that lets us down week in week out.