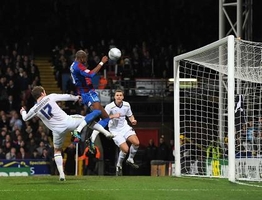 Robert Snodgrass stepped off the bench to rescue a point for Leeds in a 1-1 draw against 10-man Crystal Palace just over two weeks after undergoing surgery on his appendix.

The Scotland international, a surprise inclusion in the Leeds squad, struck from close range in the 63rd minute to cancel out Chris Martin's early opener for Palace.

The hosts played the second period with 10 men after striker Sean Scannell had been sent off on the stroke of half-time for a second yellow card.

It was the second game running Leeds had come from behind against 10 men after Ross McCormack's stoppage-time winner against Burnley in their last league outing, but today's point did little for either side's npower Championship play-off aspirations.

Palace, with one eye on Wembley in the Carling Cup, have won just three of their last their last eight league games and have dropped to 13th place, while Leeds slipped to 11th, albeit just one point adrift of the top six.

Palace wasted little time in picking up where they left off in their Carling Cup semi-final win over Cardiff on Tuesday night - Anthony Gardner's goal gave them a slender lead to take into the second leg - to take a sixth-minute lead.

Martin cut inside on the left side of the penalty area and arrowed an angled shot into the bottom corner beyond Leeds goalkeeper Andy Lonergan for his second goal of the season.

Julian Speroni then pulled off two fine saves in quick succession to keep his side ahead.

The Palace keeper smothered Clayton's effort from inside the area and then parried defender Tom Lees' shot in the 36th minute.

Palace were reduced to 10 men on the stroke of half-time. Scannell, already booked for a foul on Andros Townsend, was shown a second yellow card by referee David Coote for his clumsy challenge on Pugh.

Returning Ross McCormack's close-range effort was blocked by Paddy McCarthy and Speroni saved again, from Lees' header, as the visitors looked to make their extra man count after the break.

McCormack slipped the ball to his fellow Scot inside the box and Snodgrass tucked the ball into the bottom corner from six yards.

Republic of Ireland defender Paul McShane, signed on loan from Hull this week, made his Palace debut when replacing Mustapha Dumbuya in the 67th minute.

But Leeds continued to press. Snodgrass, Pugh and Clayton were all off target with long-distance efforts, while Speroni denied Leeds an 86th-minute winner when keeping out substitute Mikael Forssell's close-range shot.