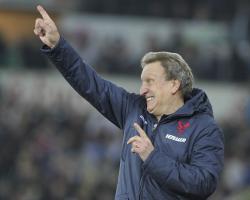 Crystal Palace 1-1 Stoke: Match Report - view commentary, squad, and statistics of the game as it happened.Point apiece in stagnant stalemateOne toothless attacking force cancelled out another as Crystal Palace and Stoke played out an uninspiring 1-1 draw at Selhurst Park.James McArthur headed his first goal in 15 games to hand Palace the lead before Peter Crouch equalised in a dire Barclays Premier League clash.Palace's patchy run of one win in 10 games has edged the Eagles closer to the relegation zone, while Stoke slipped markedly from the pace of last week's Arsenal triumph.Not even the simmering feud between rival managers Neil Warnock and Mark Hughes could ignite this insipid encounter.The distinct lack of rhythm will worry both managers, with Stoke left to sweat on the fitness of star forward Bojan Krcic, who hobbled off early in the second half.Hughes succeeded Warnock at QPR in January 2012, but lasted less than a year at Loftus Road.The former Manchester United striker was then linked with replacing Warnock for a second time, at Leeds in April 2013.That prompted Warnock to proclaim he hoped Hughes "destroys another team of mine" - the Welshman was never appointed, but the feud was still set.Warnock admitted in midweek he and Hughes still "don't send Christmas cards", with the Potters boss responding in kind.Hughes claimed Warnock played up to the media, vowing to take the comments "with a pinch of salt" and keep his opinions to himself.The pair shook hands ahead of kick-off, but could not even look at each other.This lifeless contest proved, however, that both of these clubs are still fighting to move out of Tony Pulis' shadow.Warnock emerged from retirement to plug Palace's manager gap after Pulis walked out over transfer ambition on the eve of the season.Hughes is grappling with his second Potters campaign after succeeding Pulis at the Britannia Stadium, but continues to grind his authority in fits and starts.The 3-2 victory over Arsenal pointed to all the poise and panache Hughes can add to the customary power - one week later and all that evaporated.Warnock might be hankering after a goal poacher in the January transfer window, but leaving Marouane Chamakh up front alone hardly proved conducive to widespread threat.Bolasie, Zaha and McArthur were tasked with rushing on to join the lone front man - fine in theory, but too often Palace lacked the killer option.Warnock's system cried out for the attacking midfield trio to race beyond Chamakh whenever he dropped off to link play.That happened just once in the opening hour and brought McArthur's goal.A turgid first half yielded just two chances, both admittedly converted, but beyond that quality was only conspicuous by its absence.The sprightly Bolasie laid on a neat cross for McArthur to flick a back header over Asmir Begovic to hand the hosts the lead.McArthur redirected the ball with as much neck as head, hence the reasonably sheepish celebration.Stoke's immediate riposte fooled the crowd into expecting lift-off

Crouch tapped in Walter's deflected shot to level, only for the battle to deflate once more.The malaise continued after half-time, and injury to Stoke's only creative outlet Bojan only made things worse.The longer Stoke failed to fire, the more the home side passed over repeated invitations to steal victory.With no clear chances after the break, neither side merited any reward