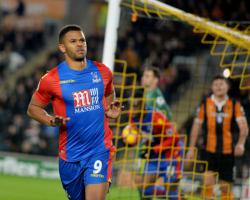 Zlatan Ibrahimovic struck a late winner as Manchester United secured victory at Crystal Palace after once again threatening to drop points from a winning position.

United had surrendered a lead in three of their previous four Premier League games and it looked set to go that way once again as James McArthur cancelled out Paul Pogba's controversial opener.

But Ibrahimovic was on hand to finish brilliantly from Pogba's through-ball with just two minutes remaining to seal a hard-fought 2-1 win for the visitors.

Jose Mourinho brought his United side here a year to the day since his last game in charge of his second spell at Chelsea and the Portuguese seems to have now found his feet at Old Trafford.

United have not lost in the league since Mourinho's ill-fated return to face Chelsea and, coupling this win with Sunday's victory over Tottenham, they have finally found a way to win games.

Palace managed to negate United's attacking threat in the early stages at the expense of creating anything of their own to worry David De Gea in the visitors' goal.

Referee Craig Pawson was not endearing himself to the home fans after a string of decisions they felt went against their side culminated in Marcos Rojo only being booked for a two-footed challenge on former Red Devil Wilfried Zaha.

Wayne Hennessey made a smart stop to deny Wayne Rooney as the game headed towards half-time, palming the United skipper's close-range effort and he was on hand again soon after to keep out Pogba's fiercely-struck volley.

But Mourinho's men would go in at half-time ahead courtesy of a controversial Pogba goal.

The France midfielder appeared to be offside as he poked home Ibrahimovic's knock-down, with the striker seemingly handling Juan Mata's free-kick into the path of his team-mate.

Joe Ledley came on at the break for the hosts and came close to levelling soon after as he flashed an effort inches wide of De Gea's left-hand post.

The Spaniard was finally called into action and had to be at his very best to push McArthur's drive behind for a corner as the hosts chased an equaliser.

But he could do nothing to keep out the midfielder's leveller as he finished low from Damien Delaney's delightful flick.

Hennessey had to turn Rooney's curling shot behind as United looked to immediately re-establish their lead, with the visitors incensed that they were not awarded a penalty as Ledley's arm met the resulting set-piece.

In a frantic few minutes, Mata had a goal incorrectly ruled out for offside and Pogba was booked for his continued remonstrations.

Substitute Jesse Lingard, who hit the winner when these two met in the FA Cup final on May 21, drew another stop out of Hennessey as United pushed for a second.

It finally came courtesy of Ibrahimovic's sixth goal in as many games as he finished with the outside of his boot from Pogba's slide-rule pass.

United saw the game out to remain six points outside the top four, with Mourinho celebrating on the pitch with his players.