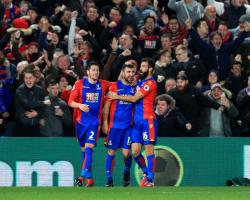 Mathieu Flamini handed his first start of the season

Slowly palace grew into the game but the consistently miss placed passes gifting United the ball. Palace though looked more dangerous on the attack however in typical palace fashion nothing happened once the ball was within 25 Yards of de GeaÃâs goal.

Which gave United the lead with a scrappy finish from the ÃÂ£100 million man Paul Pogba.

In a moment of brilliance from the Palace defence Joel Ward shimmied his way through from the left to pass it to Damien Delaney to produce a world class flick though for PalaceÃâs 2nd top goal scorer James McArthur to simply poke home.

This brought the game back level and Palace seemed a much stronger side after the goal although the passing in our own half was shocking. Wayne Hennessey was on top form pulling out top saves to keep palace in the game.

Why would you try and get the winner against Manchester United and risk a point when you are in a relegation battle I will never know.

Man of The Match Paul Pogba