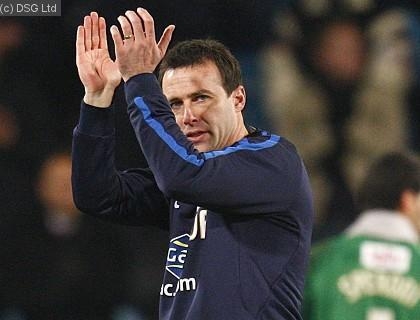 Palace give Holloway reason for cheer

New Crystal Palace manager Ian Holloway watched from the stands as his in-form side stretched their unbeaten run to 11 games to ensure Henning Berg endured a losing 2-0 start as Blackburn boss.

Holloway left Blackpool to assume the role left vacant by Dougie Freedman's departure from Selhurst Park, and he will have been impressed with what he saw as Glenn Murray's brace moved Palace up to third in the npower Championship table.

Meanwhile Berg, who himself only took charge of Rovers on Wednesday, was left in no doubt about the magnitude of the task he faces with Blackburn now having won just one of their seven away league outings.

The Eagles offered no respite in the second period and Murray stroked home a spot-kick just after the hour mark following a foul on him by Grant Hanley.

That was Murray's 10th goal of the season and although he was denied an 11th when Paul Robinson saved another penalty 19 minutes from time, Palace coasted home with ease.

The prospect of playing an in-form Palace outfit, whose last defeat came in August, was daunting enough for Rovers, but the hosts had an extra incentive with the watching Holloway assessing his new side.

Scott Dann had to be alert to prevent Murray applying a finish to a dangerous cross before Damien Delaney extended Robinson as the Eagles started brightly.

However, against the run of play, it was the visitors who almost broke the deadlock. An outswinging corner from Morten Gamst Pederson was met by Dickson Etuhu but his header crashed back off the crossbar.

Palace continued to dominate, though, Garvan firing over before a post denied Yannick Bolasie his first Palace goal.

Berg would have hoped his half-time words would be delivered with the sides on level terms, but the hosts were able to break the deadlock in first-half stoppage time.

Garvan's cross from the right found an unmarked Murray in the six-yard box and he guided his header into the net via the underside of the crossbar.

While Berg's words were confined to the visiting dressing room, Holloway was given a rousing reception as he introduced himself to the home support on the pitch.

Bolasie fired over early on in the second half as Palace picked up where they left off.

Holloway's move to south London may have been motivated by the opportunity to work with the highly-rated Wilfried Zaha, who responded in kind by putting on an attacking masterclass.

He and Bolasie both went close again before Murray lulled Hanley into a foul inside the area, which allowed the forward to double his side's advantage from the penalty spot.

Murray already has one hat-trick this season but he squandered the chance to help himself to a second treble when Robinson stopped his penalty after Adam Henley fouled Bolasie, with the contact appearing to come outside the box.

Blackburn substitute Ruben Rochina was twice denied by the woodwork as Palace rode their luck in registering their first clean-sheet at home this term.