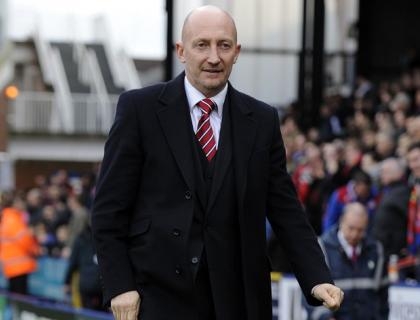 Glenn Murray took his goal tally for the season to 30 and preserved Crystal Palace's unbeaten home run as they battled back to draw 2-2 at home to Leeds.

The visitors looked on course for a rare away win - their first since December 1 - after two goals from Steve Morison cancelled out Murray's first-half opener.

But the country's top scorer had other ideas and his second of the afternoon made it 18 home matches without defeat for the promotion-chasing Eagles.

Yet there was no hint of the drama to come during a one-sided first half.

Murray had already been denied twice by Leeds keeper Paddy Kenny, who kept out his header from Wilfried Zaha's cross before saving the striker's low shot.

But it was third time lucky in the 27th minute when Jonathan Williams floated a cross to the far post.

Murray sneaked unnoticed between two Leeds defenders and planted a free header into the roof of the net from a couple of yards out.

Palace were all over the visitors, who only had a Morison volley which flew wide to show for their efforts in the opening 40 minutes.

But the Eagles were almost caught out just before half-time when Paul Green got clear and was denied by the leg of Eagles keeper Julian Speroni.

Luke Varney should have scored from the follow-up, but his shot was blocked on the line by home skipper Mile Jedinak.

Zaha had a chance to double the advantage 90 seconds after the break when he was put through by Stephen Dobbie.

Kenny came out to narrow the angle and Zaha rolled his shot a foot wide of the far post.

Dobbie then fired over from a good position, before Leeds grabbed their equaliser.

Varney broke down the left and his cross was missed by the Palace defence and found Morison for a close-range finish.

Dobbie twice came agonisingly close to restoring Palace's lead with shots which flew either side of Kenny's goal.

But Selhurst Park was stunned in the 69th minute when the Eagles allowed a Kenny punt up field to bounce into the path of Morison.

The Wales international tucked the ball past Speroni for his second of the afternoon and his third since joining Leeds from Norwich.

But Palace were not going to give up their unbeaten record without a fight and, with seven minutes, remaining Murray arrived at the far post to lash in Damien Delaney's cross and celebrate another goal.