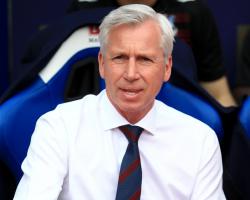 The Eagles take on Manchester United in Saturday's FA Cup final at Wembley.

Pardew was a player when Palace last made it this far in the competition, losing to United in 1990 in a replay after the first match finished 3-3 after extra-time

Steve Coppell, Palace's manager at the time and a former United player, has been recruited to help Pardew scout the Red Devils before Saturday's fixture

He has also turned to Alan Smith, Coppell's assistant and successor, for advice

"I feel the weight of the history of not winning something," said Pardew.

"We take one final which we lost into the game, so this group of players have an opportunity to put something permanent there - a first major trophy for Crystal Palace.

"One or two of these players will never play in a final again and this is an opportunity to get a winner's medal, which is so hard

Like the Leicester players, winning the FA Cup would mean the same for us.

"Steve Coppell was here; I've leant on him in a couple of bits

It's a club with a certain DNA

It would be good for the club and for our history for us to win something.

We're all very close friends, it bonded us

It made this club to a degree, that cup final.

"Friendships - I'd prefer those friendships to have carried through as winners

That's the message I'll give to my players."

Pardew has a fully-fit squad to face United except for Joe Ledley, whose fractured fibula also makes him a doubt for Wales' Euro 2016 campaign.

In a season when United have often appeared lethargic and confused, Palace's matchwinners - Yohan Cabaye, Wilfried Zaha and Yannick Bolasie - give them a fine chance.

"We will have to be patient

We'll be the side who have to fight that bit harder to win, but we have got areas of the pitch where we're slighly superior, and we have to make those areas count.

"The pressure is on them all the time

They're Man United: an historic club, the colour, the history, with names we haven't got

They take a different history into the game.

"(We are) street football - players from different roots, from non-league and Paris St Germain

"It's a special feeling for me and my family, but I've tried to distance ourselves from 1990 a bit

We do carry some staff who talk about it all the time.

"It's nothing to do with this era

There's no revenge of 'putting it right'

It's about this team getting to the cup final, and trying to win."