Glenn Murray and Anthony Knockaert handed Brighton a crucial three points at Selhurst Park as the Seagulls did the double over their rivals for the first time in 35 years.

Such has been the rise of the south coast club in recent seasons though that they are once again on par with Crystal Palacein the top flight. And after an impressive 3-1 victory at the Amex Arena in the Premier League earlier this season, they were targeting an unlikely double in the early kick-off.

⚽️ Anthony Knockaert’s goal at Selhurst Park is the first that @OfficialBHAFC have scored from outside the penalty area in PL this season pic.twitter.com/7sqDml4PjN

It was a rough, physical contest with Brighton taking the lead through Murray's excellent volley after James Tomkins failed to clear a swooping long ball. Brighton had a clear penalty shout turned down when Shane Duffy was flung to the ground but Craig Pawson waved away the appeal.

Crystal Palace had a wishful claim of their own waved away before Andros Townsend bought his side a way back into the game, drawing the foul from Davy Propper. Milivojevic levelled from the spot but a solo effort from Knockaert meant Brighton took the spoils. 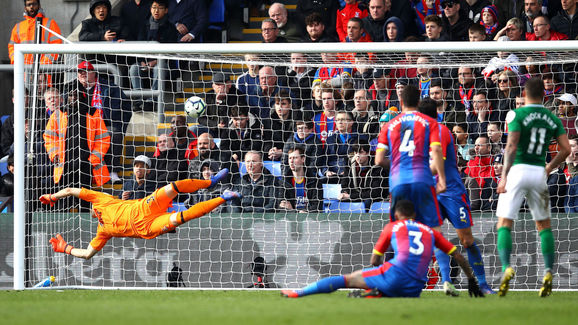 The result also had a significant impact on the league table with Brighton drawing level on points with their rivals in the relegation scrap. Both sides look in a strong enough position to avoid the drop but both still have work to do to guarantee Premier League football next season.