Southampton produced a clinical attacking display as they eased to victory at Crystal Palace on Tuesday night, with Nathan Redmond and Stuart Armstrong both scoring stunners.

The Saints struck first when Redmond worked some room on the edge of the area from Jack Stephens' pass to fire in an absolute rocket into the top left corner.

Armstrong doubled the visitors' advantage with a superb curling effort from outside the box three minutes after the break as Palace toiled for good chances in the attacking third. 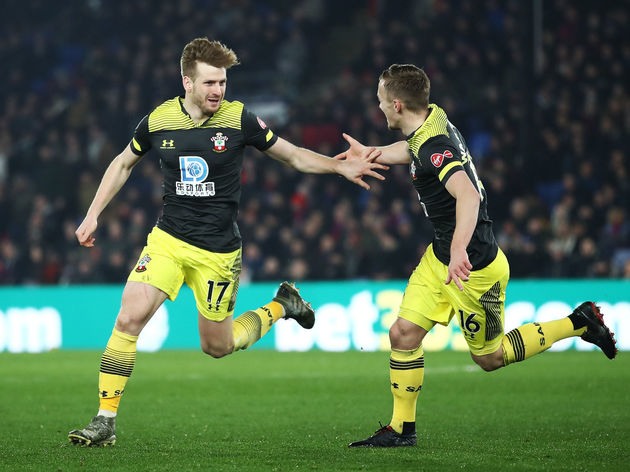 The hosts had decent spells of pressure during the second half but failed to muster up anything of note. If you want to know how average they were in front of goal, check out their Twitter feed from Tuesday night. Very little to take note of.

There's a togetherness about ​Palace that maybe isn't present at most other Premier League clubs. They've seen a lot at Selhurst Park and remain a really tricky and awkward team to beat - so awkward in fact that the Eagles had drawn their previous four league games before Tuesday's fixture.

Palace's best ever Premier League finish is tenth and they came into Tuesday's clash sat in ninth, and with a tough run in towards the end of the season it remains important for the Croydon outfit to pick up as many points as possible in the next few weeks to secure that buffer between themselves and those scrapping below them. However, that 'togetherness' wasn't entirely evident on Tuesday as they were put to the sword, with Redmond striking to devastating effect before Armstrong curled in an effort of similar quality.

The attacking threat that was present against Manchester City on Saturday just wasn't quite there on Tuesday, while Wilfried Zaha couldn't put the anger evidently building from the close attention he received from Southampton's players to good use.

It's hardly time to panic for Roy Hodgson, but the defeat gives the former England manager plenty to ponder ahead of Palace's next few games.

Not a particularly impressive night for any of Palace's players, though Jairo Riedewald again coped well playing out of position on the left. The former Ajax starlet has stuttered at Palace since signing for the club back in 2017, but injuries in the squad have paved the way for the 23-year-old to get some much needed minutes.

Given Ralph Hasenhuttl was seemingly on the brink of the sack after the 9-1 loss to Leicester in October, the turnaround on the south coast has been nothing short of remarkable.

Led by an excellent Danny Ings up front, ​Southam​pton have been emphatically clinical in securing recent wins over Tottenham, Leicester and Chelsea - though the loss to Wolves at the weekend would have undoubtedly done some damage ahead of Tuesday night. However, they were back on song at Selhurst Park, with Nathan Redmond particularly impressive as the Saints struck two brilliant goals to secure all three points.

Redmond, Armstrong and Michael Obafemi were consistently threatening on the counter, and the clinical nature of the goals was indicative of Southampton's remarkable resurrection over the last few months.

With a goal and an assist, this highly coveted award has to go to Redmond. He gave both Martin Kelly and Joel Ward torrid evenings on the wing and showed he has the final product to match his often promising build-up play with a cracking strike in the 22nd minute.

Ings has courted the headlines on the south coast, and rightly so, due to his supreme goalscoring form, but Redmond's performance set the tone as Southampton secured another win in their bid to move away from the relegation zone and into mid table.

brilliant result. as soon as i say redmond should be dropped he puts in a performance like that so i’ll take the credit for that. we needed that win after tonights results  #saintsfc

There is a special shout out for James Ward-Prowse, who just loves winding Wilfried Zaha up...

James Ward-Prowse man of the match tonight, not only for winding Zaha up but he was outstanding at right back. Stephens, Redmond, Armstrong and Bertrand also stand out players today  #SaintsFC

Palace are out of the FA Cup so don't feature again until early February, when they entertain Sheffield United. Southampton do have an FA Cup fixture at the weekend - they host Tottenham on Saturday before their next league outing, which is a trip to leaders Liverpool.