How Crystal Palace's Masters Football Team Would Look in 2020

​It's a real shame that Masters Football fell off the face of the earth around 2011.

Spending Sunday afternoons glued to the couch watching old fellas your dad keeps banging on about amble around a blue pitch was...kinda special, wasn't it?

So with the football season at a standstill, the last strands of our sanity have locked on to wondering what players would be knocking around if a revival of the concept were to come to fruition.

We've got Crystal Palace firmly on the mind, so shall we take a look at what old timers would be parading around for the Eagles? We think so - with a few rules of engagement first... Club Highlight: Winning Player of the Year three years on the bounce.

If you wander into the depths of south London, you'll struggle to find a heart that doesn't have their left atrium dedicated to Speroni. Whatever the Palace faithful felt, Speroni felt - that's how closely bonded he was the club's supporters.

Speroni was the shining beacon of light as Palace endured some dark, dark times so the Masters goalkeeping spot is undoubtedly his. What a ledge. Club Highlight: THAT goal at Old Trafford in the 2011 League Cup quarter-finals.

Club Lowlight: Not retiring after THAT goal at Old Trafford.

Absolutely loved playing in south London this man. Played 53 times in one season once too, makes you wonder if he spent the whole summer in an ice bath.

Ambrose now owns a barbers in Ipswich with his best friend. Very wholesome but come on Darren, stop giving fades and start giving Fitz Hall a rocket up the backside for not closing down. Club Highlight: Learning the ins and outs of Championship football from Shaun Derry.

Look, lovely reader, I know what you're going to say. He had a terrible time in SE25 but Davids himself said it was one of the best experiences of his life, so who am I to argue? Club Highlight: Helping Palace to their highest ever league finish at the time - third.

Club Lowlight: Cracking his shin-bone just as he was called up for England 'B'.

Ian Wright, Wright, Wright! He could probably still do a job in the Premier League so if he goes up top in the Masters, their 'keeper has no chance.

One of England's most prolific finishers and an all-round-nice chap. He'll score seven to win you the Masters cup, then buy you a pint in the bar after. Club Lowlight: Not getting a chance under Trevor Francis.

Much like Speroni, Johnson is a certified Palace legend. Not just on the pitch though, he was made an Honorary Patron of the club's foundation.

Him and Wright would make a great partnership up top, with unique goal celebrations and about three hairs on their head between them. Glorious. Club Highlight: Being a standout player in his one season.

Club Lowlight: Getting relegated in his only season.

The fella who holds the record for the most Premier League relegations (five). There's just something about having an Icelandic defender that makes your team look dead hard, though. Not a bad backup for Darren Ambrose, eh? 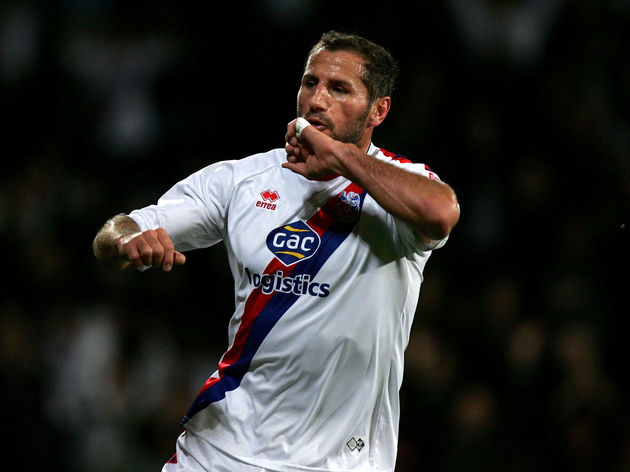 Club Lowlight: Making an offensive gesture to Palace fans after he was subbed.

Right, this guy has had more clubs than Tiger Woods but you're absolutely lying if you wouldn't want to see his trademark celebration on a blue six-a-side pitch.