​Crystal Palace defender Mamadou Sakho is set to undergo an operation on the knee injury he sustained in the Eagles 4-1 win over Leicester City last weekend and will likely miss the rest of the Premier League season.

The centre back collapsed in the second half of Palace's victory on Saturday and has since undergone tests to determine the extent of the problem. ​The Guardian reports that Sakho, who was spotted attending Paris fashion week on crutches, has suffered a 'serious' injury, with manager Roy Hodgson now resigned to losing the defender for the remainder of the campaign.

The report claims that a pre-existing knee problem was the reason the 29-year-old was left out of Palace's squad to face Doncaster in the FA Cup, while he complained of an issue following the draw with West Ham on 9 February.

The news comes as a blow to Palace at a key point in the season. Sakho had been a key player for Hodgson's ​side in 2018/19, featuring in all 27 of their Premier League games this season, missing only 15 minutes of action. 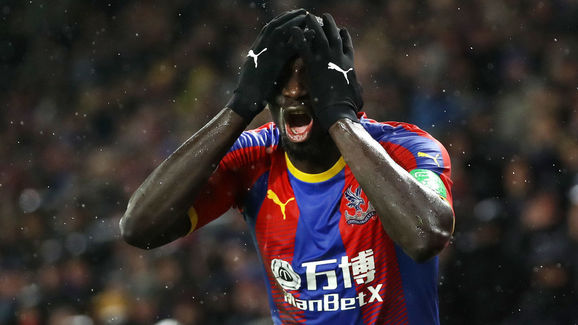 In Sakho's absence, Hodgson can call upon Martin Kelly and Scott Dann to fill the void at centre back. However, the latter has featured in only 14 minutes of football this term, after returning from his own knee injury.

Crystal Palace, who moved six points clear of the relegation zone with their win over Leicester, next face Manchester United at Selhurst Park on Wednesday evening.