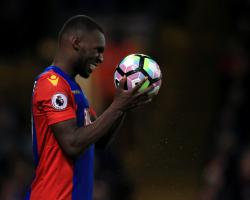 The Belgium striker ended a dream week with a nightmare blunder from the spot as Manuel Lanzini's goal secured victory for the 10-man Hammers.

Benteke began the week by scoring the fastest goal in World Cup qualifying history on his way to a hat-trick against Gibraltar, and three days later celebrated the birth of his daughter.

But when handed the opportunity to cap a remarkable seven days by cancelling out Lanzini's strike to earn Palace a point, Benteke scooped his spot-kick horribly off target.

"I think it's a crucial moment," said Eagles boss Pardew

"I was expecting him to score after the week he's had."

The blame for Palace's defeat cannot be laid entirely at Benteke's door, although he also hit a post with one header and planted another over the crossbar.

Pardew was equally unimpressed with Palace's sluggish start as they handed the initiative to a West Ham team who kicked off second from bottom, without a win in five matches.

They took the lead in the 19th minute when Aaron Cresswell fizzed in a precise, low cross which Lanzini gobbled up at the near post for what proved to be the winner.

"It's a derby and I expect more aggression and more brightness in that first 20 minutes, and that was a crucial part of the game," added Pardew.

We missed the boat.

"West Ham have been criticised for their defending this season - but believe me they defended very well out there."

The decision to award Benteke a penalty just before half-time after he was tripped by Angelo Ogbonna was correct, but referee Martin Atkinson was roundly condemned for sending off Cresswell.

The left-back, impressing on his first appearance of the season following a knee injury, was clipped by Yohan Cabaye in the area only for Atkinson to book him for a dive.

That decision was compounded just 48 seconds later when a linesman flagged against Cresswell for a minimal tug on Wilfried Zaha, forcing the referee to produce a second yellow card

Pardew admitted Cresswell had been harshly dealt with, while Hammers manager Slaven Bilic said: "The first yellow is a penalty for us, and the second yellow is simply not a yellow."

Nevertheless, Bilic was not going to let that decision spoil a much-needed, and deserved, second victory of the season

"The players showed basically everything; confidence, competitiveness, team spirit and quality on the ball," he added.

We had lost our confidence a bit, but now we came back, we deserved it and we can't let it go.

"This has got to be our minimum

It's a very important win for us - but we have to continue like this."